We presents a fully distributed scheduling framework called CASTLE (Client-side Adaptive Scheduler That minimizes Load and Energy), which jointly optimizes the spectral efficiency of cellular networks and battery consumption of smart devices. To do so, we focus on scenarios when many smart devices compete for cellular resources in the same base station: spreading out transmissions over time so that only a few devices transmit at once improves both spectral efficiency and battery consumption. To this end, we devise two novel features in CASTLE. First, we explicitly consider inter-cell interference for accurate cellular load estimation. Based on our observations, we exploit the RSRQ (Reference Signal Received Quality) and SINR as features in a machine learning algorithm to accurately estimate the cellular load. Second, we propose a fully distributed scheduling algorithm that coordinates transmissions between clients based on the locally estimated load level at each client. Our formulation for minimizing battery consumption at each device leads to an optimized backoff-based algorithm that fits practical environments. To evaluate these features, we prototype a complete LTE system testbed consisting of mobile devices, eNodeBs, EPC (Evolved Packet Core) and application servers. Our comprehensive experimental results show that CASTLE’s load estimation is up to 91\% accurate, and that CASTLE achieves higher spectral efficiency with less battery consumption, compared to existing centralized scheduling algorithms as well as a distributed CSMA-like protocol. Furthermore, we develop a light-weight SDK that can expedite the deployment of CASTLE into smart devices and evaluate it in a commercial LTE network. 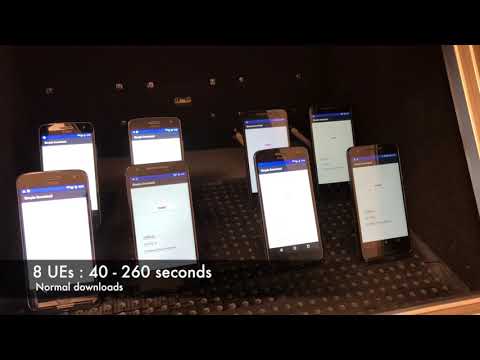